Shouldn't using iPads in school be a duty?

Everyday smartphones, tablets and computers are influencing us. Only in school we've got none of these modern things. Nevertheless, the actual task of schools is to prepare the children for their further life. So in my opinion iPads in school are the best way to do it.

Probably the most frequently mentioned argument that supports my opinion is that children wouldn't have to take that much paper with them. In the evenings they wouldn't have to put three books and folders into their backpack. They would only need to take their books and their iPads with them. That is also a good deal for their back. I know it from myself because I have an iPad for school too. Since I've got it, my back doesn't hurt anymore after I come home. This is a big advantage because your back can't lift that much weight at a young age.

The next advantage has something to do with the different papers from different subjects. When I take a look at my older brother, I can only see one chaotic mountain of papers where everything for school is inside. I don't think my brother is the only one who does it. In my opinion iPads would bring more order into your life in school. I made that experience too and I'm so happy to have a tablet for school.

On the one hand there are so many arguments that support tablets at school but on the other hand there are some disadvantages, too. When you have iPads in school your screen time is automatically higher, especially when you have a lot of homework to do. That is also a bad deal for your health. Even though there is a problem with your screen time, you will learn how to use the Internet and that's very useful. Especially for presentations or class tests, you can prepare yourself more effectively.

What's more that the work with the Internet will be a big supporter for your future. Nowadays it is often expected that you have got a good knowledge of Microsoft or PowerPoint. With an iPad in school, you would practise everything from the beginning and later it will be easier for you to use those different programmes.

Will We Get Lost In Digitaization?

In many schools iPads get introduced, but not only teachers wonder if that was the right thing to do. Digitisation is inevitable. Even though I like to call myself an analogous person, I have to do much of my work on the computer too. I like books, paper, and folders better, but iPads surely are a lot more useful.

Many people argue that digital devices lead to a loss of focus, but that isn’t true. If students hadn’t got their iPads, they would play with paper, talk to their neighbours or look out of the window. When there is no will to focus, there will be no focus. However, the digital devices that are used wrongly can lead to addiction and that is a big drawback as addiction reduces the ability of  the brain to learn and remember, but through an app for Apple devices the teachers can see what the students are doing on their pads and older teens hopefully know when to focus.

iPads also have a lot more structure to them than folders. Everything you write or work on otherwise gets saved in some digital folder so that it is a lot easier to access. If you don’t forget your device, you won’t forget your work.

In conclusion I think that iPads in schools are good idea, but in my opinion only the older teens should possess a device as younger students could easily fall for the false friend of digital media. In the era of digitisation, we need to keep up and understand our devices or else we’ll get lost in the chaos of cables.

Are iPads useful in school?

First of all, the lessons are more creative than usual, because the teachers have many new options for their lessons, so that the students don’t always do the same things.

Moreover, students can do tests on iPads, for example in Latin we have the app Navigium, where we can learn vocabulary and also do vocabulary tests.

A big disadvantage is that teachers can’t really control what the students are doing on their iPads, which means they could play videogames in lessons or could cheat on an important test. That wouldn’t be fair on the other students, who don’t cheat. This is why I think teachers should be allowed to see what the students are doing in the lessons, with the result that students can’t play videogames.

One of the biggest advantage is that using iPads would be more eco-friendly than paper, which means we wouldn’t need to use paper anymore. We need to protect our nature and planet and if we don’t use paper that much, the nature would rest from the damage that we humans did. Maybe we can help to stop climate change and learn from our mistakes.

In conclusion I think iPads are really useful in school if we use them wisely, for example we can protect our nature more if you use the iPad long enough. Teachers should be allowed to see what the students are doing, so that they can’t play videogames. All in all, iPads are a good idea, because we live in the time of the digitalization and many people use an iPad for school.

For a month, I have been using an iPad in lessons and it really helps me. This is why I am concerned that you should absolutely use an iPad as well. Using iPads and modern technology in lessons is a fantastic advantage and idea!

Needless to say, iPads are modern and innovative. An iPad is able to do nearly everything you want it to do. Moreover, an iPad is varied so you’ll never have to use pen and paper again.

Most people may say that iPads can distract children and teenagers from working but I’d like to point out that iPads can be controlled by teachers. That means that there are several apps that prevent students from playing video games and watching YouTube, etc.

Besides, an iPad is a big responsibility. That means that children will learn how to be careful with expensive technology. Furthermore, they will learn how to use iPads which is important because in a few years you will have to work with computers or iPads to earn money.

I’d like to add that iPads could help to organize your school stuff better because you can add files to sort your homework or class tests and so much more.

Another big benefit would be that if you have got an iPad, you don’t waste paper or ink for your pens and you wouldn’t have to pay for it anymore. Moreover, this would be a big advantage against pollution because there wouldn’t be paper or homework flying anywhere.

What’s more, while many forget their homework at their home, iPad users have the advantage that they only have to bring their iPads and don’t have to remind themselves to bring their books, etc. That’s why an iPad is very useful and helps you very much. Furthermore, it motivates you to learn more and that’s the most effective way to become a fantastic student.

Evidently, there may be some disadvantages but in contrast to that there are many benefits and advantages. I can promise you that an iPad will make your school life easier and better.

Have you heard about iPads being introduced in school? Do you like that idea? In the following text I will explain to you how iPads are good and bad and after that, I will share my opinion with you.

It is probably everyone’s dream to have an iPad in school, no more backpacks, no more books and exercise books and pencil cases. This dream has maybe come true for many people, but everything has advantages and disadvantages.

Firstly, an iPad has to charge, it needs electricity. Maybe one day before school, you haven’t charged your iPad and you're in the hurry. That would be very bad, but probably a friend in your class has a charger.  However, what your friend didn’t know about, was that not all people use a Samsung tablet. He has a charger that doesn’t fit, and you have a useless piece of metal.

Secondly an iPad or a tablet can break. If you drop your iPad, it could be broken after that. However, there is a cloud where all the data is stored, but how are you going to use the data with no iPad. Then you’ll have to get it fixed which costs a lot of money or stay with no iPad.

Thirdly, many people use their iPad when they aren’t supposed to. Maybe you send your friend the scanned paper that you and the class are working on. That is a good reason to use your iPad. But a lot of boys play “Clash of Clans” in class. In short, they are not paying attention, which affects their oral grade and the reason you are supposed to get an iPad was to get better in school! What they do is the exact opposite. I personally made that mistake with a laptop. I regret it every day now because my grades got so bad because of that.

I could have gotten a better report card. I disappointed my parents very badly.

Because of these arguments, I come to the conclusion that having “iPads in classrooms” is bad idea. If you want to have fun in school, please have fun in the school’s break. Do not make the same mistake I have done.

Thank you for reading. 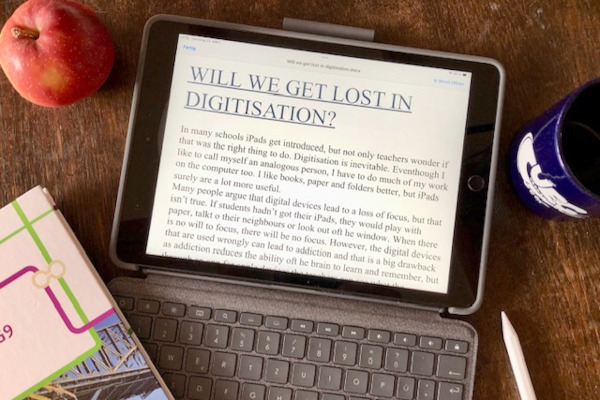 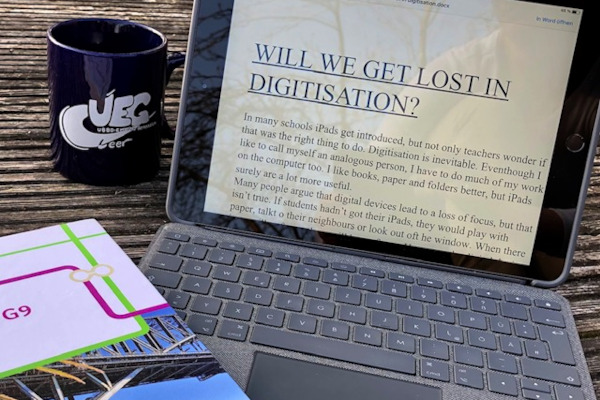