The day we were all looking forward to had come and everyone was excited to finally be able to participate in our class trip. Since our last class trip was cancelled due to Corona, we were even more thankful and glad to go to Berlin - a class trip we won't forget.

Berlin has wonderful places, but first I want to talk about the journey to this huge city. At first, what was a surprise for all of us was that the train arrived just in time, something new from the “Deutsche Bahn”. But then the catastrophe began: you can believe what a chaos it was when all the students wanted to enter the train with all their luggage and bags, but after everyone found a seat and the bustle ended, we had a short break before the real challenge began. After one and half hours of sitting in this overcrowded regional train we had to change trains in Bremen. With a 15 minutes delay and your other train on the last platform of the whole train station that means: Run! So 32 people in an overcrowded train station with all of the luggage ran in a crazy way to make the connection. Then we had to tell people that these seats were reserved and they had to leave. This huge scramble took us 15 minutes before everyone got a seat. The same procedure was repeated at Hamburg central station. I´m surprised that we didn’t lose a single student.

The third and last train took us from Hamburg to Berlin where we arrived without any big delay. For me as a student and part of the class it wasn´t hard to change the train, but I think it was hard to handle for the teachers because they had to keep an eye on every single student. A few minutes after we arrived at the central station, we took a local train to the "Potsdamer Platz“, which is a place with many new and modern buildings, for example the "Sony Center". We were stunned by the high buildings and crowded streets. Even if I and many of the other students have visited Berlin before, the view surprised us. It took us about 15 minutes to walk through sunny streets, until we arrived at the "Three Little Pigs" Hostel for our very first time. We had already explored a tiny part of Berlin on our way.

Because our arrival was two hours before we could actually move into our rooms, we started our visit in the capital city of Germany with some free time to explore the area around the hostel. We were able to swarm off and that was when all of us realized how centrally it was situated. Some of us went to a pizza restaurant and paid 10 euros for a pizza so we knew Berlin would be very expensive.

Later in the evening, we met at a monument of the Berlin Wall. While waiting until everyone was there a seemingly important person, who was accompanied by police, arrived at the Ritz Carlton Hotel next to us, which was an interesting experience. When everyone was there, we spent some time talking about the monument. Afterwards we walked to the Brandenburg Gate. On the way there the sun already went down, which made the experience special. When we were there, we took some pictures in groups, alone, and of the whole class. Following that we went to the Bundestag. There was a light show projected onto the Paul-Löbe-Haus called “Dem deutschen Volke”. After watching the show about the history of the German parliament, we went back to the hostel after having an adventurous first day in Berlin.

On Tuesday we firstly had breakfast at around 8 am. We met in the lobby of our hostel to eat tasty bread rolls, muesli, or other things from the buffet like fresh fruit salad and lots of cold cuts. After our breakfast we had approximately one hour to get ready. At around 9:30 am we met in the lobby from where we walked to the Jewish Museum. When we arrived at the museum, we had to go through the security check, where we scanned our bags and ourselves to make sure no one brought anything dangerous like a knife. After everyone finally passed the check, we all got guided to a big room where our big group got divided into two smaller groups. After that we all got headphones, because the guides didn´t want to shout during the entire tour. The exhibition was about the situation of Jewish people in Germany from medieval times up to the present. The tour was great, because at some points we could really feel like Jewish people. But we don´t want to give away that much because you should go to the museum yourselves.

After the museum we got into groups of five so the teachers could give us subway tickets. On the subway we travelled to different places in Berlin. Some of us went to "Kottbusser Tor" in Kreuzberg where we ate some delicious kebab at Hasir.

Others visited the famous department store KaDeWe or went shopping elsewhere. At 10 pm we were back at the hostel.

On Wednesday we were very excited because tomorrow would be Jonas' birthday. Room 309, 311, and 312 organised the ingredients of the birthday cake and were prepared to bake it. However, the kitchen staff couldn’t let us into the kitchen because of Covid-19 restrictions. You can imagine how disappointed we were. But against all expectations the kitchen staff was glad to help and agreed to baking the cake for us and we saved ourselves a lot of work.

After all that chaos of organisation we went to the Berlin Philharmonics. We were all were a little bit excited because nobody knew what to expect. We visited a lunch concert and some of us also bought their lunch there. Arriving there we sat down on balconies and stairways. In my opinion the architecture of the building was impressive. You would probably not believe me! It all looked so beautiful and noble! At the philharmonics we talked to a guy who told us some things about himself and the history of the lunch concerts. I think everyone was positively impressed by the classical music that the quintet played. We listened to four pieces of the German composer Brahms. The concert was about 45 minutes long and the five musicians played four fantastic and relaxing music pieces. Sometimes it was hard to tell if they were finished, because they did really long breaks, so that nearly everyone thought they were finished. A few people even applauded when the musicians weren't done, which I think was quite embarrassing.

Afterwards some of us had to go to the toilet. On our way a woman with a microphone caught us and asked us questions. It was my first real interview, so I was very excited and confused. I really didn't know what to do! As a surprise, it worked pretty well! I said grammatically correct sentences and was calm. We answered questions like where we came from and what we thought of the concert.

After a little break and after everyone had eaten something, we met at the “Topographie des Terrors", a memorial place about the terror of the Nazi regime. Our teachers told us to explore the museum by ourselves. When we finished, we talked about the things that happened years ago in Berlin. Everyone had to say what he or she was had learned and what had affected them most.

After we got our tickets for the underground, we went shopping with our teachers Ms Waalkens and Mister Nienaber. Because the clothes in the first two shops were too expensive for second-hand we went to a third shop that turned out the best. We had a lot fun and a lot new clothes in a sustainable way. My tip for you: second-hand is always a good idea! Thereafter we separated from them and went out to eat at the Mall of Berlin. After a short walk to our hostel (about 8 minutes) we got cosy. At midnight we sang a birthday song for Jonas who turned 15. After that we were all dog tired and went to bed. Another long but nice day was over.

On Thursday we surprised Jonas with the big cake the ladies from the kitchen had prepared for us. It had icing and candles – a proper birthday cake and after Jonas blew the candles, we all had a piece.

Before we met in the administrative district near the Spree River in the afternoon some of us went to the "Olympiastadion" to take some photos. Unfortunately, it rained a bit there, but that didn't bother us, because luckily it didn't rain the whole week. Then we wanted to visit a few sightseeing places that you must have to have seen if you were in Berlin, for example the "Deutscher Dom" where we visited an exhibition, or the "Französischer Dom" which we only considered from the outside.

Others went to the zoo. We had a bit of a struggle to getting there, since we needed to use the subway, but we manged to get there after all. The zoo is about 2 times the size of the zoo in Hannover, however it only cost 9 euros each. The animals that really stood out to me were the Okapi, the Capybaras and cute otters. They even had a sweet little baby. The otters were especially cute. Otters are however very protective of their offspring and showed anyone who came to close their rows of sharp teeth.

It was the most interesting day of our class trip to Berlin. On this day we went to the parliament with the whole class. That was very fascinating because we saw many different things, for example the bridge between the Paul-Löbe-Haus and the Marie-Elisabeth-Lüders- Haus where we had a great view over Berlin and the big dome of the Reichstag building with thousands of mirrors where we could watch the sunset. Isn't that great? Moreover, we had a conversation in the "Paul-Löbe-Haus" and a talk in the plenary hall. As a small souvenir, we got a bag, a book and a pin. Then we had free time till 10 p.m., so we went back to an old-fashioned pizza place near the hostel which was still open and ordered take away. In the evening some of us played a few rounds of pool billiard till 9 p.m. and had a nice "little" get together with nearly all the class, this went on for about two and a half hours and we finally went to sleep at midnight. Of course, we were all really tired the next morning, but we had the long train ride home to relax. It was an amazing and wonderful class trip and a great experience we will never forget. 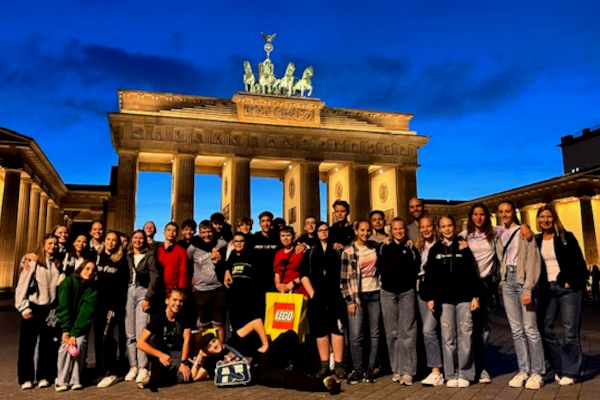 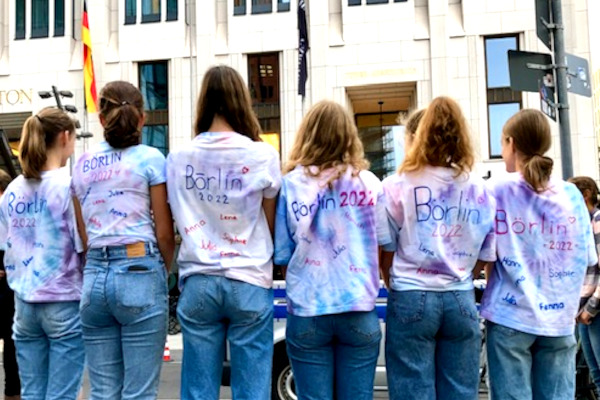 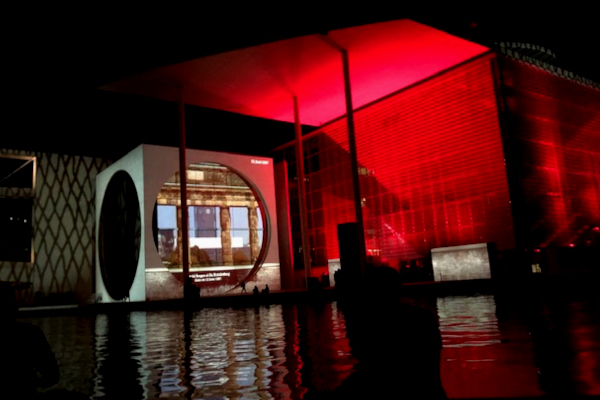 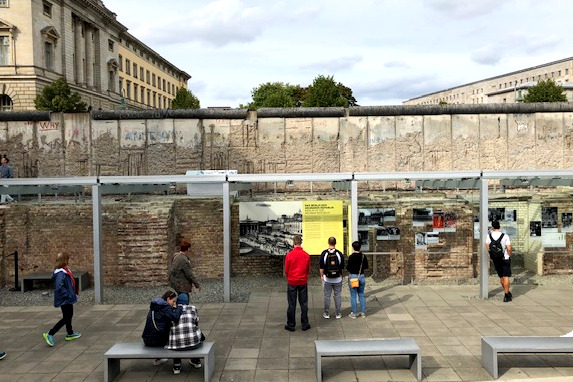 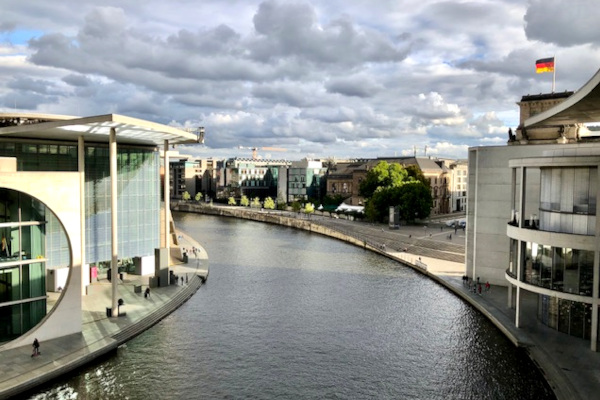